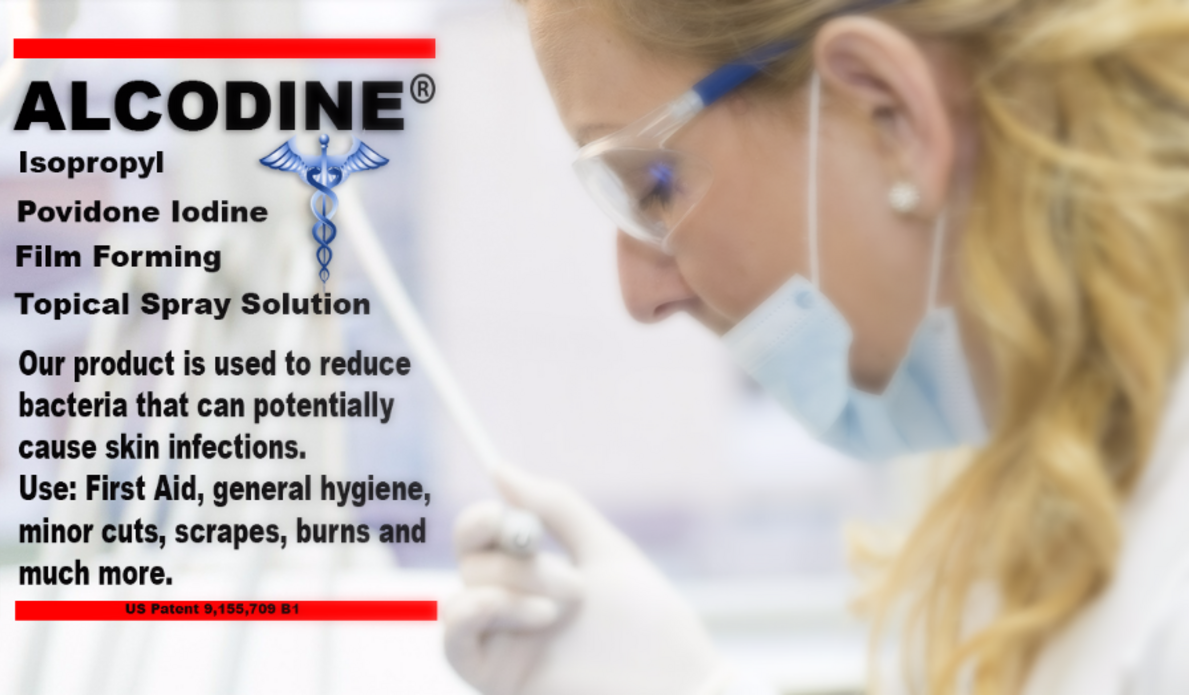 Alcodine® was discovered by us in 1999 based on spiritual prompting to blend two long-established products Rubbing Alcohol and Betadine®.

These products prior to being blended were not effective in treating or containing the skin conditions we were confronting over a long period of time. We were looking for a product that would be safe and effective when applied to various areas of the body to control and/or contain bumps, bruises, scrapes fungal irritations, and insect bites.

We were very surprised to learn first that when we blended Rubbing Alcohol and Betadine® the solution became spontaneously warm, indicating that an exothermic reaction was occurring. No apparent instability was observed when the solution returned to room temperature.

This initial blended product was not done with the intention of creating a commercial product. We tested the product on facial bumps, bruises, scrapes fungal irritations, and insect bites and found to our surprise that its curative properties were outstanding. We also observed that when the product was sprayed onto body surfaces, a sustained releasing Iodine film was formed

​We have continued to evaluate this product since 1999 and we found that the product is very stable and it will not freeze. No negative side effects have been observed to date when used on all external surfaces of the body except directly into eyes.

The US Patent for Alcodine®Products contain formulations combining ingredients that permit free Iodine, slowly liberated from the Povidone-Iodine (PVPI) Complex in solution to, “kill Eukaryotic or Prokaryotic Cells through Iodination of lipids and oxidation of cytoplasmic and membrane compounds”.

The combination of agents inAlcodine®exhibit a broad range of microbicidal activity against bacteria, fungi, protozoa, and viruses. Slow-release of Iodine from the PVPI Complex in solution minimizes Iodine Toxicity towards Mammalian Cells.